Git remote : How to Collaborate

Create your first pull request, and learn how to collaborate efficiently on software projects with git remote and github.

Collaborating with git can be quite intimidating at first...

This is due to several reasons :

After reading this guide, you will get a better picture of all this, and you will be able to collaborate smoothly with fellow developers on great projects !

This article is the second part of my series about Git. If you haven't read the first part, Git : Overcome your Fears, please take a look now to make sure you understand the basic concepts of Git.

For this tutorial, I have chosen GitHub as a remote git platform because it is accessible to everybody, and because most open-source projects are on GitHub.

But if you're using a different platform such as GitLab, don't worry, all platforms are very similar.

Here is the outline:

What are remote repositories ?

There's no magic here : a remote repository is simply another git repository.

The main difference with your local repository is that the remote is hosted somewhere on the internet, and not on your local machine. Most often, remotes are either hosted on github.com or on a private GitLab server belonging to an organization.

Apart from that, remotes are standard git repositories: they have commits, branches, tags, and so on.

For example, let's assume that Guido and Bjarne want to collaborate on some new software project called nohtyp. They have set up a remote repository on GitHub that would host the official version of the code.

To provide a new feature, Guido has:

At the same time, Bjarne has implemented another new feature. To contribute, he needs to:

With this simple workflow, Bjarne and Guido can exchange code and build their project together, without ever connecting to the other person's machine. Also, each of them is still in full control of his own local repository.

But this workflow should never be used, because it is not safe. Indeed, it would require giving all developers the right to push into the official repository. And with the right to push, any developer could wreak havoc into the repository, e.g. by deleting important branches.

In the next section, we will see how this security issue is avoided by using forks and pull requests.

If we forbid people to push to the official repository, how can they contribute ?

With forks and pull requests !

Here is a modified git workflow :

This time, each developer has his own remote repository on GitHub, to which he is free to push.

Here is how these remote repositories were created:

When a new developer wants to start contributing to the project he starts by "forking" the official repo to his GitHub account. Essentially, this just means that a copy of the official repo is created on his account, and that he takes full ownership of the copy. In this process, GitHub keeps track of the link between the fork and the mother repository for later.

After the copy is done, the fork and the official repo can (and will) diverge.

With this architecture, the development workflow is the following.

So what is a pull request ?

This is a much less intrusive operation, since the administrators can review and refuse the PR if they so wish.

The details will become clear below when you send your first pull request.

But before that, let's get our tools ready.

Create your GitHub account if you don't already have one.

To interact with your remote repositories, you will need to connect to github with ssh from your local machine.

Follow the official ssh instructions from GitHub to set this up. This is going to take you a bit of time now, but it's really needed.

Test your ssh connection to GitHub:

Finally, check your git configuration, which is in the file .gitconfig in your home directory.

You should make sure that your name, your email, and your github username are correct:

It's important to do that, because this information will be included in all of your commits so that your collaborators can see that a commit is from you.

Forking and cloning a GitHub repository

For this exercise, I've provided a test github repository, which will serve as your "official" repository. And I'll be the repository administrator!

I actually hope this guide won't attract too many people ... or it will be a lot of work for me.

Now, fork the repository by clicking on the fork button at the top right:

This will create your own copy of this repository and bring you to its page.

Now that this is done, you will clone your fork to your local machine. This will :

To do this, click on the Code button and select ssh. Then copy the URL use it to clone the repo like this :

Finally, enter the working directory of your local repository:

In this directory, you will find a simple script, hello.py, that you're going to modify later:

Ok, I should have written greet and not great :-) it would be a pain in the neck to correct this at this stage, so I'll leave it like this. Apologies!

Many people are going to collaborate on this script, so don't be surprised if it evolved. The code shown above is the original version, from commit bdfe1a4.

Now check the history with git l (the alias that we defined in Git : Overcome your Fears :)

We see that git@github.com:<your_github_username>/datafrog_git_test.git is connected as a remote, with local name origin.

This was done automatically by git clone.

You can also establish remote connections easily after the fact.

Add the official repository as another remote, with name colin:

If you print your remotes again, you now see:

You could remove this remote with git remote rm colin, but don't do it, we will need it.

And there is nothing special about the origin remote, you could remove it as well, and re-add it with a different name if you prefer, as long as you know its url (you can pick it up on its GitHub page).

Updating your version of the code

Before starting to work on a new feature, I suggest to always update to the latest version of the official code.

Since you just forked and cloned, your version of the code is probably identical to the version of the official repository. But you can't be sure, so let's go through the update process.

First, we fetch the state of the official repository:

Here is the git fetch documentation.

git fetch does not modify the state of your local repository. It only gathers remote information. So this command is completely safe. Don't be afraid to use it often, so that you know what's going on remotely!

Before doing anything, check the history with git l to see what you're going to merge into your version.

Now that you have all the necessary information from the remote, you can merge the remote branch into your current branch:

After that, your current branch contains all commits of origin/main in its history. This is good, you can now start building your new feature on top of the official version.

You could also start developing your new feature before merging, it makes no difference.

some people use git pull, which is the equivalent of a fetch followed by a merge. For example:

does the following under the hood:

I only do that if I exactly know what's on the remote branch. Usually, this is the case if I pull from my own remote. When I want to get code from another remote that I don't control, I always do a fetch, and I only merge when I know what I'm going to be merging.

After merging, test the code again. If the package contains unit tests (and it should), run them. If there are executable scripts, run them. Here, we can run our small script:

Pushing your modifications to your remote

In this section, you will modify hello.py to add your name.

Open this file with your editor, and add your name to the list everybody, as shown below:

Test your changes by running the script. If the package features unit tests, run them.

Advice: if you can, make sure that the tests pass before each commit.

If the tests succeed, you can commit:

Push the main branch to your fork (the origin remote):

And use git l again to check the history:

The push moved origin/main in your fork to the same commit as the local branch main. In the process, the needed commit (45ae389) was copied to your fork.

At this point, the of code of origin/main in the remote is exactly the same as the one of the local branch main, since both branches point to the same commit.

But the code of the official repository (colin/main) did not change.

We want to make our changes official, so it's time for a pull request to the official repository!

Contributing with a pull request

Go to your fork on github. You should see something like this: 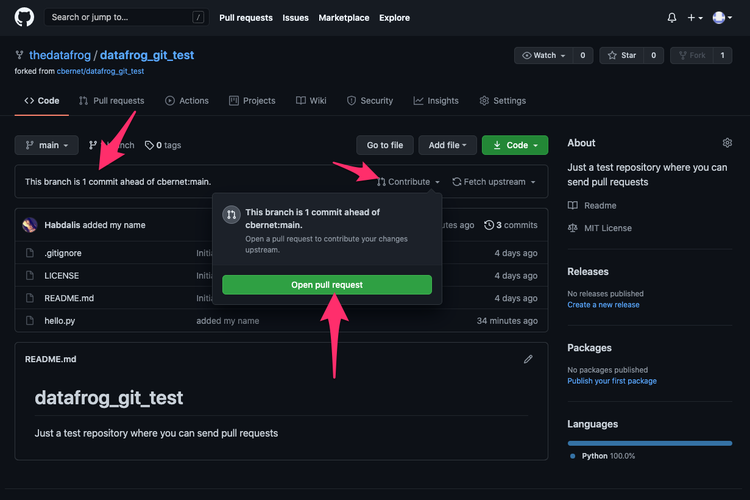 In particular you can see the status of the main branch in the fork with respect to cbernet/main, which is the same branch in the official repository, the mother of your fork.

This opens a new window: 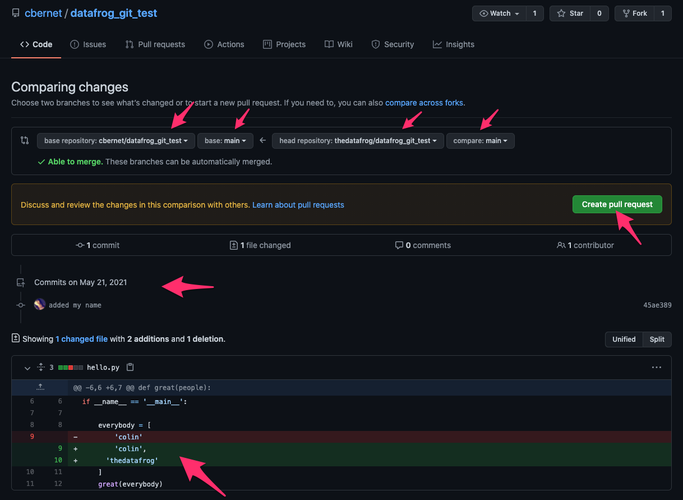 Take the time to review carefully all the information on this page:

This brings you to a new form in which you must give a title to the pull request and provide some information as shown below. Then click on create pull request. 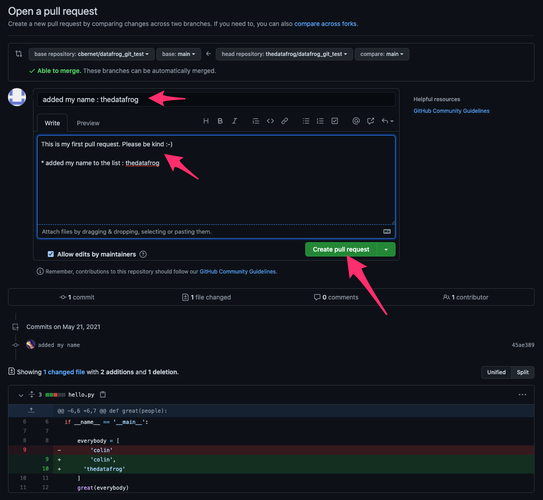 The administrators might ask you to make changes to your pull request. To do this, you can simply update the source branch in your fork by:

When you do that, your new commits will be added to the PR automatically.

Guidelines for a successful pull request

You should always remember that repository administrators are people like you and I.

They are certainly quite busy, and they often maintain open source packages in their spare time, as a contribution to the community. Also, it could be that they don't even know you, let alone trust you.

So the first thing to do is to make sure that your PR is even wanted.

In any case, check the official repository to see if there are any instructions explaining how to contribute. If there are, follow them, or your PR will be ignored.

In general, I would suggest to do the following :

When you're done, and before you submit the PR, merge the latest changes from the official repo into your local repo, and check carefully that everything is ok :

After submitting the PR, be kind with the admins, and answer their questions as well as you can. Be reactive.

In this article, you have learnt how to collaborate with others using git remotes. You have :

Although we used github as a remote git platform, the process is going to be exactly the same on other platforms such as gitlab. The only thing that is going to change is the web interface of the platform.

In the next article, I will tell you about a few advanced features of git, stay tuned!