In this post, you will learn how to build an open-source smart home, with a raspberry pi, home assistant, and docker, to stay in control of your data and avoid vendor lock-in.

Real estate experts predict that within the next couple years, all new properties will be smart homes.

At the moment, in the US, 27% of households own at least one connected device. This proportion is also relatively high in Europe, with 16% in Germany, 12% in France, and 8% in Italy.

The market has been expanding for a few years, and the big actors take position with their proprietary solutions. Of course, the GA(F)A are already here : Google Home / Nest, Amazon Alexa, Apple HomeKit. And they are not alone : large companies like Philips (Hue) or Legrand (Netatmo) also want their share of the cake.

This game involves a growing number of big chinese players. The most notable one is probably Xiaomi, which builds the best home electronics devices I’ve seen so far (Aqara, Mi).

The hub is a concern for two reasons.

Second, the hub is connected to internet and knows about your network and your devices. If the Hub software is closed source, who knows what the hub is doing with your data ? Is it even properly secured ?

There are several open source solutions for home automation, e.g. openHAB, Domoticz, Jeedom. I’ve tried a few, and I think that home assistant is the best.

And it’s written in python ! So if need be, I can even code what I need by myself. Or at least can I understand the code.
Home assistant runs very well on a raspberry pi (I use a 3B+). It’s a perfect, low-power home automation station. And you can also run it on your NAS if you have one.

In this article you will learn how to :

Get a raspberry pi. A raspberry pi 3B+ is perfectly fine, and you can also go for the fancier raspberry pi 4 if you so wish. But clearly, you won't need that much horsepower.

To install, you can follow my tutorial for a headless install: Raspberry pi Zero W : Headless Install. It has been written for a raspberry py Zero W, but it will work just fine with any kind of raspberry pi. Just note that :

When done, make sure to upgrade your system:

And install docker as explained in the next section.

To install docker on a raspberry pi, follow the official instructions, that I recall here:

Add the pi user to the docker group to allow this user to use docker without sudo:

In addition, we will need docker-compose, which makes it easy to define and run docker services. The easiest way to install docker-compose is to do it with pip.

So install pip for python 3:

Log out and log back in, and docker-compose will be in your PATH, which means that the system will find the executable when you type the command. Test it:

If you want an introduction to docker and docker-compose, you could have a look at my article Data pipeline with Docker, InfluxDB, and Grafana.

Create a working directory for your home assistant configuration :

Inside, create a docker-compose.yml file :

This compose file declares how you want to run your home-assistant container:

And most importantly, we use the host network mode, which is necessary for home assistant to find some devices on your network.

Home assistant will need a bit of time to initialize. You can check that it is running by doing:

You can also check which ports are used by the home assistant server. To do this, install lsof :

We see that home assistant is listening to port 8123.

Assuming the name of your raspberrypi is raspberrypi, use your web browser to visite the home assistant user interface at

In this process, home assistant will certainly already detect devices and services on your network, such as connected printers, google cast devices, things like this.

Don't hesitate and set them up !

Finally, you end up on the main home assistant page, and you can configure almost anything from there.

Then, you'll be able to create new dashboard cards and tabs. 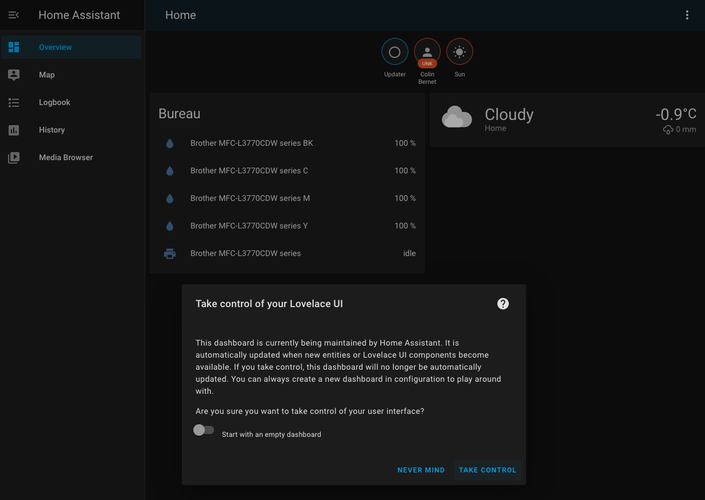 In the image below, you can see what I have so far on my main dashboard:

If you'd like to have more details about one of these subjects, just tell me in the comments below. 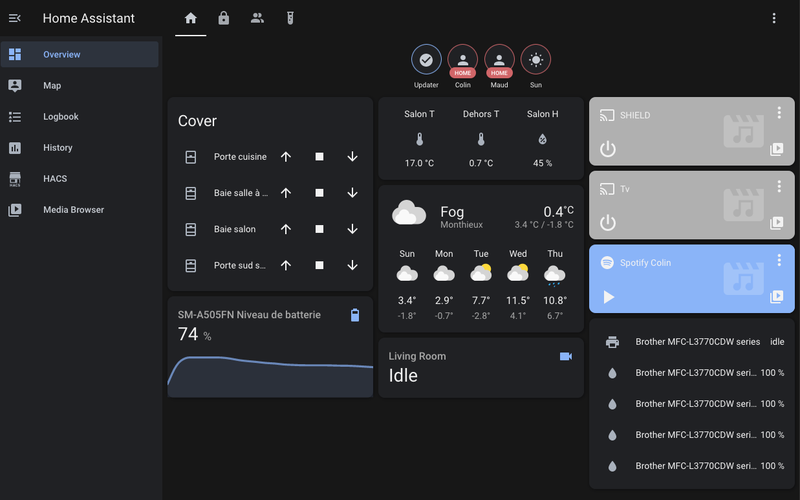 And in the second tab, I set up a complete alarm system based on an array of Zigbee sensors.

The alarm system is fully automatic: when we're both away, the alarm is armed, and one of us comes back, it is disarmed, so we never have to think about it.

When the alarm is triggered, we get a loud pushbullet notification on our phones, so that we can check what's going on with the camera, and possibly call the cops. I still have to set up a siren though.

But enough for now, I'll write a specific post about the alarm later. 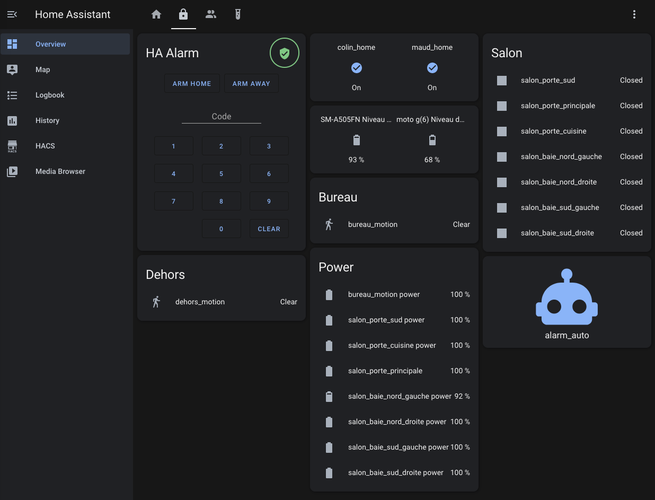