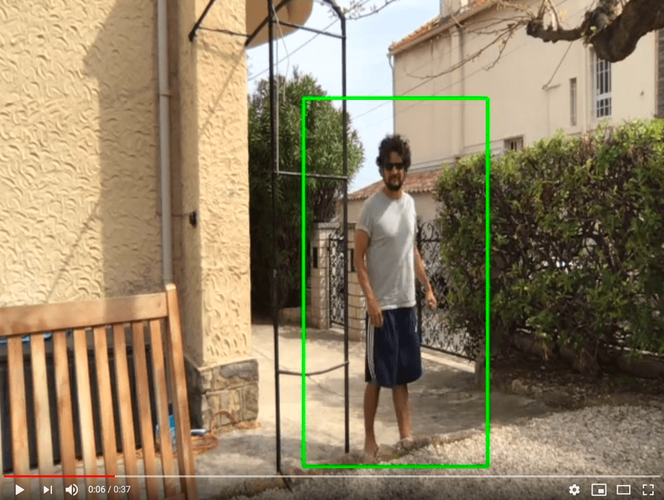 Today, we will write a program that can detect people in a video stream, almost in real-time (it will depend on how fast your CPU is.)

In my article about object detection with darknet , we have seen how to use deep learning to detect objects in an image. For this, we used a YOLOv3 neural network, pre-trained to detect and identify objects in 80 categories (person, car, truck, potted plant, giraffe, ...).

YOLOv3 is the state-of-the-art object detection algorithm: It is very accurate and fast when evaluated on powerful GPUs, compared to other algorithms.

However, even with a GeForce GTX 1080 Ti, it takes 200 ms to detect objects in a single image. And for real time detection, one needs to go down to 40 ms / image or less, to be able to process video streams at 24 images / s.

Also, powerful deep learning workstations are expensive, and they consume a lot of power. So they are certainly not adequate if your goal is to build a small home surveillance system that's running all the time.

So here, we won't do any deep learning. Instead, we will use simple machine learning tools that can be evaluated really fast on a CPU.

OpenCV is the open source computer vision library, and it's super powerful. Here are a few random things that you can do with it:

You could start with the OpenCV tutorial , and also have a look at the very nice blog from Adrian Rosebrock. That's actually where I first got in touch with OpenCV!

So let's install the tool. Today we'll install it through Anaconda. I assume that you have already installed anaconda for python 3.X. If not, you can follow these instructions .

If you know how to use the command line, you can install them by typing:

Otherwise, just use the anaconda navigator.

Reading from your webcam is easy with OpenCV, just write the following script and run it with python:

You should see a window pop up with the image from your webcam:

This method is trained to detect pedestrians, which are human mostly standing up, and fully visible. So do not expect it to work well in other cases.

Before discussing this method, we'll give it a try. Modify your script as follows:

With these parameters, the detection is done almost in real time on my machine. You will see that the detector works better if the person is not too close to the camera. If the person is close, several overlapping boxes are often shown.

However, this performance is more than enough for a small home surveillance system, which will be the subject of a future article.

How does HOG work?

You're already able to detect people in a video stream, and you can stop here if you wish!

But if you want to know how the algorithm works, read on, I've tried to explain it in simple terms.

The performance of the HOG algorithm is shown in the original paper by Dalal and Triggs. However, to really understand how the algorithm works, I had to dig in the references of this paper, and especially this seminal article about hand gesture recognition.

You can also have a look at this nice blog article .

What is a gradient?

In 2D, in the (x,y) plane, a function of x and y is a surface giving the altitude at every point. The gradient is the generalization of the derivative: at a given (x,y) point, the gradient is oriented towards the direction of maximum slope, and its magnitude is the slope of the plane tangent to the surface at this point. Here is an illustration from the wikipedia article :

Let's come back to our case. In a black and white picture, the greyscale level is analogous to the altitude, and the gradient is a measure of how fast the level changes and of the direction of the change. An edge in the picture (a black to white transition) leads to a large gradient perpendicular to the edge, from white to black. In a colour picture, one can compute a gradient for each colour level, and e.g. take the maximum gradient over the three colour levels.

So why are the gradients said to be oriented? A gradient is always oriented. It just means that the method keeps track of the gradient direction, and it makes up a good acronym, HOG.

What is an histogram?

An histogram is a data structure that is used to compress data and to represent its probability distribution. An histogram can have many dimensions but in practice, 1D and 2D histograms are most often used. In HOG, the gradients are stored in a 1D histogram, so let's focus on that.

We define the histogram by describing its bins. The bins are baskets that count the number of entries with a value falling within the bin range.

You can type this in ipython to see the histogram:

You get this histogram:

It is also possible to weight each value. When the value enters the histogram, its contribution to the bin is given by the weight, which is 1 by default. Here is a weighted histogram:

The basic idea of the method is the following:

The last point is the subject of the next section. Here, let's see how the histogram of oriented gradients is built for a given cell, with a small example:

You get the following plots. We see that in the gradient plot, flat surfaces disappear, and the edge is clearly visible.

In this histogram, 0 corresponds to the gradients going to the right. There is only one arrow going down, shown in the bin [270;290[.

If several pixels in the cell have gradients with similar orientation, they contribute to the same bins. Also, large gradients contribute more. So The peak on the right side corresponds to the edge visible in the cell.

Histogramming the gradients in this way makes it possible to recognize edges easily in the cell.

Now this histogram is for a single cell. We need a procedure to analyze all cells in the current detection window to find out if the window contains a person or not.

Putting all cells together in a machine learning classifier

Any kind of machine learning classifier can in principle be used to take a decision (is there a person or not?) based on these values.

However, since there are a lot of dimensions (2560 in our example) and the number of images available for the training was not very large, Dalal and Triggs decided to go for a Support Vector Machine (SVM) (a linear one). That's also what is being done in the OpenCV implementation of HOG.

To explain SVMs, it's necessary to wield advanced mathematical tools, and this is way out of scope for this blog. But if you're interested and are at master level in maths or physics, you could follow this great lecture from Andrew Ng (not for the faint of heart!).

You have also learnt how HOG works.

And if you liked this article, you can subscribe to my newsletter to be notified of new posts (no more than one mail per week I promise.)

You can join my newsletter to learn more about machine learning and data: